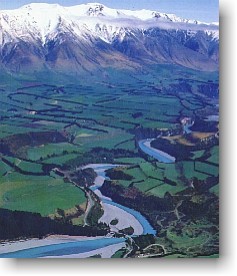 Salmon fishing in New Zealand is based mainly on the South Island east coast rivers. The scenic Rakaia River is considered by many as the best salmon fishing river in New Zealand. The Rakaia can boast to having the most consistent salmon runs of any of the NZ rivers.

So a day or two chasing these impressive fish is a good option to consider when planning your NZ fishing trip.

Salmon begin returning to the Rakaia river in mid November to start their migration up to their spawning grounds in the head water tributaries. In New Zealand the main salmon fishing season runs from January to mid April. The Rakaia run peaks during February and March.

The type of salmon we have in NZ is the Quinnat, (also know as the Chinook or King) which can grow up to 40 lbs. Some seasons produce an abundance of larger fish, over all they average between 12 to 15 lbs.

The guided day starts at day break as this is when the salmon are most active, so be prepared for an early start.

Most salmon are taken on spinning gear, using Zed or Colorado spoons, while the fly fisherman can expect success also.

Methven provides the ideal base with it's range of accommodation and it's 15 minutes to the Rakaia river. The Waimakarri and Rangitata rivers are both also within easy range from Methven.

The nature of the salmon fishery is that it varies from year to year. Please inquire to find out the present seasons prospects as when it is good it can be very good.

Salmon fishing technique for New Zealand salmon rivers are quite straight forward but there are some basic rules to follow once you arrive at the pool.

Fish deep. Salmon hug the bottom of the river so you must have your lure close to the bottom to be successful. I like to feel the lure tap tapping it way down the pool as it bounces off the rocks on bottom. Salmon never stray far from the main channel and will travel in the deepest water.

Cover the water thoroughly. Start at the head of the pool and work your way down, shorter casts first and lengthen them out. Take a step down stream every 2 - 3 casts. But spend most of your time in the eye of the pool, fishing the most likely water.

Persevere. Stick at it, you wont catch a salmon if your lure is not in the water! Put as many factors as you can in your favour, then stick at it as you will catch a salmon hopefully sooner rather than later. Remain positive and anticipate a hook up on every cast. 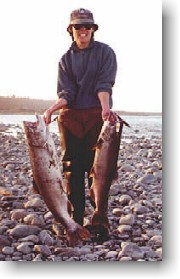 For fly fishing for salmon the minimum required would be a 9 weight 9 foot rod with a high capacity reel, a fast sinking line to match, alternatively a floating line with a fast sinking tip can be an advantage.