About Fly Fishing from Wanaka

The Wanaka region has some of the most amazing landscapes, boasting gin clear rivers, streams and stillwaters with large wild brown and rainbow trout, a combination that provides a ‘once in a lifetime’ fly fishing experience.

Wanaka is a great place to be based for any none fishing members of your party as there lots to do locally. Explore the vineyards, taste the local foods at the numerous cafes on offer or simply stroll around the lake and enjoy the fresh alpine air and stunning scenery.

Being situated in the southern lakes region of the South Island we are surrounded by large high country lake catchments which provide you with an endless amount of fishing opportunities. From crystal clear bush clad mountain streams to lowland rivers flowing to the East and West coast of the South Island.

OCTOBER 1st sees the new fishing season begin with the opening of the lowland rivers and streams , the weather can be variable and water temperature still fairly cool , but a good time to hit the smaller streams that arent as affected by the snow melt and still have some larger trout residing in them .Angler numbers are lower at this time.

NOVEMBER 1st sees our backcountry rivers open for the season a  great time to be out on the water as things are starting to warm up, still some snow melt in the larger rivers . The dry fly fishing is beginning to hot up with the appearance of  Brown Beetles.Still some large fish to be found in the smaller streams.

DECEMBER is one of my favourite months to be fishing still plenty of water in the smaller streams .Caddis , Brown and Green beetles plentiful , and angler numbers still fairly low.

JANUARY sees the KIWI holiday maker on the waters things are fairly busy now , terrestrial fishing is starting to hot up good mayfly and caddis hatches early morning and in the evening.

FEBRUARY is the peak month for our visiting anglers ,smaller streams are at their lowest so fish are more wary , terrestrial/cicada fishing on the high country lakes is in full swing and most trout will freely rise to a big dry.

MARCH cicadas still on the wing some fantastic dry fishing still to be had , visiting anglers are starting to thin out a little rivers can be still rather low .an increase in mayfly hatches as the days get cooler.

APRIL days are getting cooler this sees some of our larger rivers experiencing some great may fly action aswell as our smaller spring creeks and streams and the dry fly fishing can be awesome this time of year.30th of April sees the lowland rivers and streams come to a close for the spawning season.

MAY the backcountry rivers are still open with some great fishing , you are still able to raise the odd fish with a dry fly and a big streamer fly really comes into its own on some of the bigger resident fish , angler numbers are now very low.season closes on the 31st of May.

Rivers are now closed for spawning but their are still a few options available for fishing in some regions if you dont mind the cold! 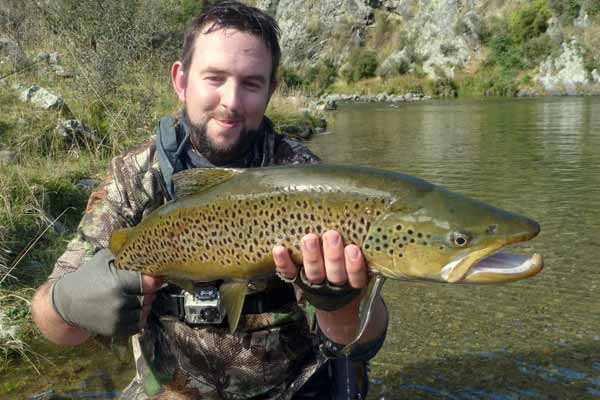 Lake river mouth fishing can be very productive over the winter months as trout congregate before starting their spawning runs.

Feel free to contact me if your are interested in a days fly fishing during the winter months , it can be a great days break from the Skiing if you are tired and sore!

Let Paul hook you up with some of the 'best of New Zealands' on the stunning rivers of Wanaka!