About Fly Fishing in the Rangitikei River Area 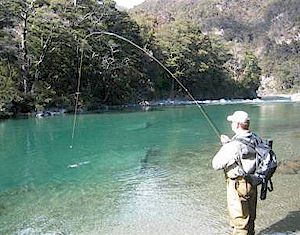 Green Trout Guiding is a fly-fishing guiding service based in the Rangitikei District of the Central North Island of New Zealand.

Jim offers fly fishing opportunities to both rainbow and brown trout for anglers with no experience through to competent anglers.

The region encompasses the Central Southern part of the North Island, with four major fishing rivers and there tributaries.

There is very scenic wilderness/back-country fishing in rivers within the Forest Parks that divide our region from north to south.

Outside of these parks, rivers and streams flow through peaceful hill country farmland and lowland river plains to the sea with a number of spring creeks.

The Rangitikei River has a reputation for it's big Rainbows and Brown trout in scenic surroundings. 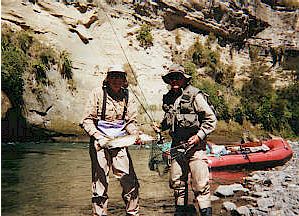 The internationally renown Rangitikei River is the jewel in the crown.

The Rangitikei River is one of New Zealand's longest rivers. Its headwaters are to the southeast of Lake Taupo in the Kaimanawa Ranges and its outflow is into the Tasman Sea 40 kilometres southeast of Wanganui. 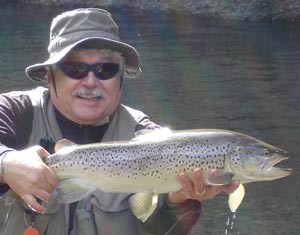 Most of its 241km length provides good to excellent fishing ranging from trophy rainbow and brown trout in wilderness surroundings to estuary dwelling sea-runs, though in recent years the size of fish has decreased, 7 - 8 lb fish are still likely with occasional fish to 10lbs.

The Rangitikei river is our base river but we use rivers which flow into the Rangitikei as well as other rivers within a relatively short drive.