More than twenty brown trout, ranging in size between 10 and 20 pounds, in a one kilometre long stretch of roadside ditch, closely flanked by six metre high blackberry and swamped by large willows….

Hardly flyrod country – but when it’s the only legal method on this water there had to be a few funny moments. After all, it was practically a joke  attaching yourself to these brutes on the fly – even with fifteen pound tippets and size eight nymphs (just so the steel would hold).

When, on the strike, his fly rod ended up slipping around a steel post behind him – with fifteen pounds of fast brown threatening to snap it in short order.
Or when six fish, with a combined weight of close to one hundred pounds, all decided to turn tail and hurtle towards us….Gotta admit to being almost scared at that point! After all, the ditch is only four feet wide and a mere two foot deep in most places. I for one was certainly glad I had neoprene waders on at that point – if not purely for their “shin guard” advantages. The bow wave leading them was fairly intimidating. 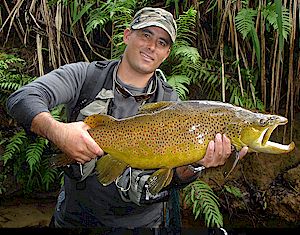 Yes, yes – of course we tried just putting the landing net in their way – and yes, as we had jokingly suggested, the fish sailed straight into it, and clean through the bottom, blowing out the hoop in the process! He was about 18 lb’s that one.
Never, never ever in my life have I seen anything quite like it – and on public water too. I guess that no-one before us had ever thought to crawl off the roadside, down the tunnel through the blackberries and drop into the drain.

There was only one place that a fly could actually be cast through the length of the one kilometre long beat – the rest was simply dangling a weighted nymph from the rod tip below three inches of line. With the nature of the brownie being that if it lies still it thinks you can’t see it – one could walk right up to the fish and bug it with a nymph in the manner described. Sooner of later it would bite at it! It was definitely more of a bite, as opposed to eating it – and the strike had to be quick or you witnessed first hand how quickly a trout can spit out a fly. Yes, this was definitely slingshot and bow-and-arrow casting country, and gave us both a new insight into the term “all hell breaking loose. 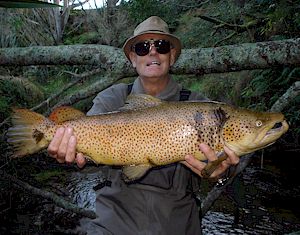 But ohhhh, what was the point – every fish we hooked completely smashed us in less than five seconds – did I mention the one that dived straight under the bank into the tangled mesh of blackberry and carried on in for some metres – got a bit of eel in them those brownies I reckon! Had to laugh when Shaun decided to feel his way down the line to see if he could feel the fish stuck well under the bank and hopefully “land” it – then deciding, upon remembering that it was well over fifteen pounds worth of fish, with huge jaws, and needle sharp teeth, that it wasn’t such a good idea.!! One just had to stand and laugh at the futility of our predicament! We simply could not stop them.

We drew the conclusion after five hookups that the only way we were going to bank one of these monsters was if they made a mistake, and made a mental note to avoid at all costs letting one run between our legs, dragging the rod tip after it!
I tried chasing the next one as it tore off back down the ditch. All that happened was I got very wet, and the brown (a mere 12 pounder) dived into the blackberries when it had had its fun with me, abruptly ending the connection.

We left the ditch in the failing light completely exhausted, highly excited, somewhat shell-shocked, and wondering how flyfishing could ever be the same again! We were also fishless!

Strangely enough it was only two days before I raced back to the skinny brown ditch, heavily veiled under its dense curtain of blackberry and willow trees. I hadn’t slept much those two nights – it was a trout fishers nightmare….confronted with large numbers of massive brown trout, and yet unable to lay a hand on one. There were fish in there that were probably over the 20 pound mark – bigger than many kingfish I’d seen. But how to put one on the bank with the fly rod was as yet beyond me.

I had my friend Nick with me this time – primed to face visions of awe, ruined only by despair….could we bank one this time?

The look of disbelief on his face as we jumped into the ditch said it all…until I pointed out the shape of a massive pectoral fin. Only then did he accept the reality, and enormity of the task ahead.

We had seen some eight double figure browns by the time we got to a particularly overgrown section of the stream. One of them had been well over 15 pounds, with the others a shade over ten….nothing that could have prepared us for what we were about to witness. For in the shallow water in front of us now lay two brown trout bigger than anything either of us had ever imagined possible. They were so big that the water hardly contained them, lying side by side with their broad olive-brown heads swaying lazily in the gentle trickle.

We just sat down…it was all we could manage, each of us well aware of the other’s inability to do anything else. Anyway – what else could we do? Catch them? Not a chance….yet it was the only thing on our minds as we sat and watched, calculating the odds of landing such a beast on our flimsy rods.

It was quite a picture, and we sat for a good many minutes soaking up the scene, catching the memory at least, of these outstanding trophies. 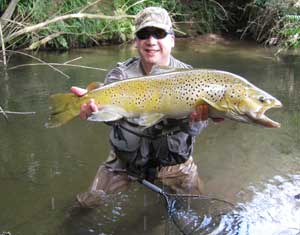 I thought they had seen us as they slowly moved up the shallow stretch of sand, side by side. But then they stopped, perhaps ten metres above us, and turned downstream towards where we sat. Then a strange thing happened. Something I have never witnessed before. They both stuck their heads into the sand, heaving the back half of their long bodies out of the water, and proceeded to headstand their way down the remaining stretch towards us. Tails sticking high in the air, waving simultaneously like two synchronised swimmers. It was quite a sight! Then one of them broke and tore off up the pool at huge speed before turning and flying back down, smack into the middle of the other fish. The noise was loud, a sickening blow of flesh meeting flesh, clearly audible from where we sat. It made us both catch our breath as they fell in side by side and repeated the whole ritual again.

What a treat, sitting hidden watching those two giants perform this bizarre ritual over and over – even today I couldn’t say whether it was a love or hate situation between them. I really can’t explain it. But I did know we had to have a go – and in one cast they were gone. 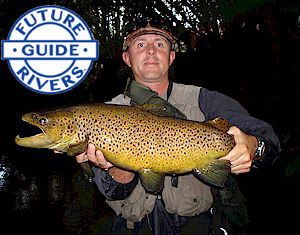 Later in the day we finally managed to bank a fish from that drain. It was hardly a battle either. For when I struck the fish it barrelled on the surface briefly before launching itself up onto a shallow bank. I threw my rod down and dived on him, heaving him up onto the safety of the hard. The fight took perhaps seven seconds in all, and yet it had been such a battle getting it.

We decided to keep it, for it was a trophy in more than a few ways, and it weighed close to fifteen pounds. Nick has since managed to haul one out that went over twelve pounds, and it too simply made the mistake of running the wrong way
We haven’t seen those two giants again either. They dwarfed all the other double figure browns that we saw and somehow belittled our feat of landing one.with their own antics  If you’re ever lucky enough to run into them, just sit and watch and enjoy.